Which is More Effective- Shooting with One Eye Open or Two? 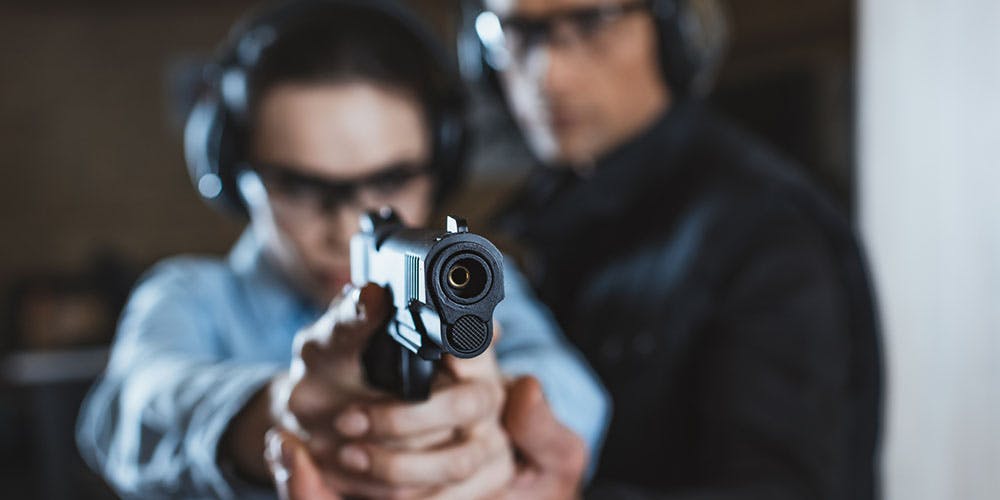 If you’ve ever shot a gun before, you likely started out the way most people do – closing one eye to aim while looking towards your target. However, some experienced gun owners prefer to shoot with both eyes open. Why do they do this? What’s the most effective approach? We’re looking at the pros and cons of shooting both ways.

Let’s start with the way that seems most familiar to new shooters – by closing one eye and looking through the scope or down the iron sights with the open eye. Which eye you close depends on whether you’re right or left handed, but you generally want the eye that’s closest to the gun to be the open one.

(Here’s just a quick pro tip – whatever eye you decided to keep open and aim with, just make sure you don’t make an inexplicable decision like The Governor from The Walking Dead and aim with your blind eye that’s covered with an eye patch!)

Pros to Shooting With One Eye Open

There’s a reason why most people learn how to shoot like this – it’s incredibly natural. As the NRA’s Shooting Illustrated points out, most of us have what’s called a dominant eye, which is, without getting into too much technical detail, the eye that’s better at interpreting visual data and relaying it to your brain. If you’re curious about finding which of your eyes is your dominant one, here’s a quick and simple test.

Also, closing one eye makes it easier to direct your focus solely on your sights or what you see in the scope, blocking out everything else.

Cons to Shooting With One Eye Open

The previously listed benefit of directing your focus is, in the opinion of a growing number of shooting instructors and experts, actually a negative. Many people train to use guns and own them for self-defense or for recreational hunting. In a situation in which you’re using your gun for these purposes, you actually want to be able to see everything around you.

Although it may be easier to focus on one thing, closing one eye significantly reduces your field of vision and your ability to see your surroundings fully.

Overall, shooting with one eye open offers the following pros and cons:

Now to the lesser known way of shooting – with both eyes open. As we mentioned, many experienced shooters and gun enthusiasts prefer to shoot this way. Here’s why.

Pros to Shooting With Both Eyes Open

The increased field of vision is arguably the most important and notable benefit from shooting with both eyes open. Hunters scanning the sky or horizon appreciate being able to spot not just the mallard that’s currently in their scope, but also the one 50 feet away from it for the next shot.

Shooting with both eyes open greatly increases repeatability. This means having both eyes open allows you to move on to the next target quickly without possibly disorienting yourself from making rapid switches between one eye being open and both.

Cons to Shooting With Both Eyes Open

If you’re shooting with safety glasses on (which you should ALWAYS do), a neat trick is to lightly coat the lens of your non-dominant eye with a bit of lip balm to blur the image. This will eventually help your brain to disregard any double-vision effects you might be experiencing and allow you to focus on your target with both eyes open.

To summarize, here’s what you can expect when shooting with both eyes open:

Related: How To Improve Your Shooting Accuracy As A New Shooter

Hone Your Skills and Your Aim at The Range 702

At the end of the day, it really doesn’t matter whether you shoot with one eye open or both. Most shooting instructors will tell you that you should do what feels natural and gives you the best results. If you’ve started with one eye closed, it may be worth trying to learn how to shoot with both eyes open. As we’ve seen, there are benefits to both styles, and it can’t hurt to try each one to formulate your own opinion.

If you’re looking for a great place to practice these shooting styles with some of the coolest firearms around, come on down to The Range 702 in Las Vegas and experience Nevada’s largest indoor shooting range with professionals who can help improve your skills. We also offer special packages and custom shooting experiences so you can make the most of your visit to The Range 702!