Firearms During the First Thanksgiving 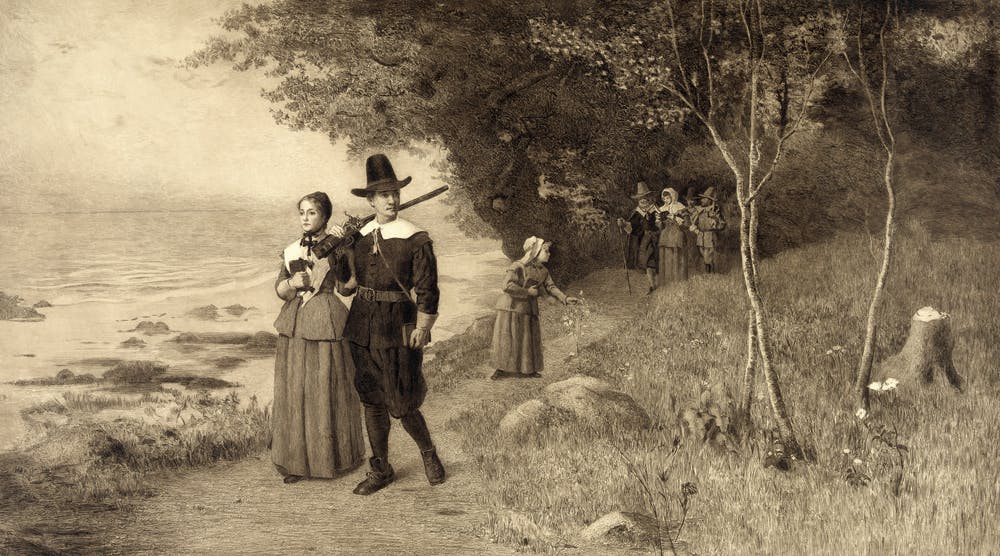 The feast enjoyed on the first Thanksgiving didn’t hunt itself! The Pilgrims had to forage and hunt before setting the table. Here’s a list of the firearms used during the First Thanksgiving.

Imagine the feeling of stepping off a 100-foot-long wooden ship onto the virgin shores of Plymouth, Massachusetts, as the first colonial settlers. They had no idea what to expect. Would there be hostile natives in the area? Would there be dangerous animals ready to pounce upon landing at Plymouth Rock? Or, would the area be the New World the settlers were hoping for – full of wild game, fertile soil, and a temperate climate?

The reality was, the area was pretty harsh. But thanks to some of the weaponry brought along, the settlers had the ability to tame the wilderness, put food on the table, and protect their small group from hostile invaders. Let’s take a look at some of the most popular guns of the past you’d expect to see around the time of the first Thanksgiving.

This ingeniously-designed, short-barreled rifle looks almost comical in profile – thanks to the bell-end barrel and stubby overall design that makes up the Blunderbuss. But it packed a devastating load that could down game with a single shot or engage in enemy combat with ease. It used the reliable Flintlock ignition system that was quickly favored among marksmen.

Tough to pronounce but easy to shoot, the Miquelet-lock was used the world over and was regarded as a highly-effective close range weapon. The Spanish military loved it as a sidearm, and it was quickly adopted by groups around the globe who demanded a reliable and simple weapon.

The majority of settlers in the Plymouth area outfitted themselves with Matchlock Muskets. While they were hardly revolutionary at the time (the matchlock design had already been in use for more than 150 years across Europe), it was a familiar weapon for those who grew up dealing with burning rope and raw powder charges. Elementary? Yes. Powerful? Absolutely.

Brought ashore by Pilgrim John Alden, the Wheellockwas revolutionary in that it offered much better weather protection than most other guns of the day, it could be carried, concealed, and it sported a .66-caliber, rifled steel barrel that dramatically improved the accuracy potential of the era’s weapons. It could take down big game beyond normal firing ranges (most guns of the day were horribly inaccurate beyond 40 or 50 yards) and the lightweight design was easy to carry in the field.

While not technically a firearm, cannons are a staple of this time period and we can’t talk about weaponry without addressing the classic. Cannons were most likely used to fend off potential threats or attacks, not necessarily for hunting.

The Pilgrims came across the sea with a variety of muskets, rifles, pistols, and Blunderbusses in their possession. The interesting part is, they had no real idea what to expect when they landed in the New World. By bringing along a variety of weaponry, they prepared themselves for whatever danger was on the horizon. As contemporary marksmen, we enjoy looking back on the history of weaponry and how yesterday’s guns have morphed into today’s choices. Visit the Range 702 for your chance to get your hands on some of the most interesting and iconic firearms today.