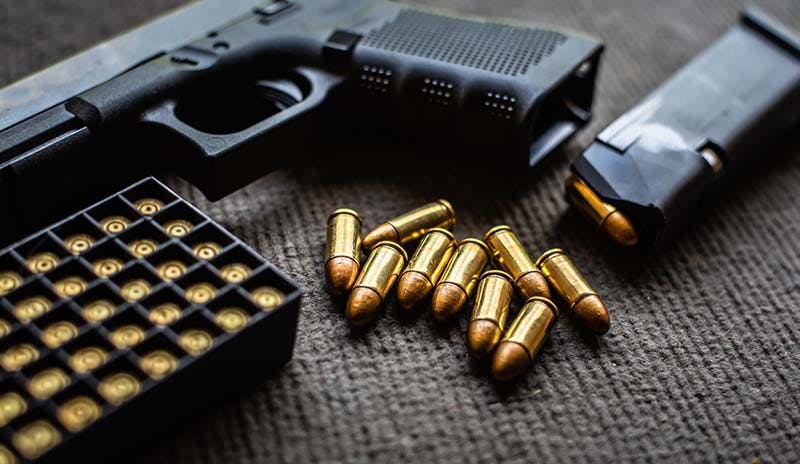 If you’re unfamiliar with guns or basic shooting terminology, you’re not alone! Many people are hesitant to test their aiming skills at a shooting range because they assume they’ll be surrounded by firearm aficionados. As the largest indoor shooting range in Las Vegas, we’re here to tell you that’s simply not the case. Our guests range anywhere from experienced gun enthusiasts to first-time shooters.

If you’re interested in learning more about firearms, here’s where you can start. We’ve put together a glossary of the most commonly used firearm terms below:

This is an abbreviation for “Automatic Colt Pistol,” which is a caliber specification of a handgun cartridge. The term originates from the auto-loading Colt Firearms pistols designed by John Browning in the early 20th century.

The operating mechanism on a firearm that presents the cartridge for firing, removes the used casing and introduces the new cartridge. Bolt-action, lever-action, and pump-action are all examples of action types.

Also referred to as “ammo” and measured in rounds, ammunition is what is loaded into a firearm. It’s made up of multiple parts, including gunpowder, primer, and a projectile wrapped in a casing.

Although this term is sometimes incorrectly used as the abbreviation for “assault rifle,” it actually means “ArmaLite Rifle” and most commonly refers to the AR-15 rifle.

Often used by the military or police, this is the technical term for a selective-fire rifle that fires reduced-power ammunition from a detachable magazine. Examples of an assault rifle include the AK-47 and M16 models.

An automatic firearm chambers, fires, and ejects multiple cartridges with a single pull of the trigger. Also referred to as a “machine gun,” it will continuously fire rounds as long as the trigger is engaged and the magazine has ammunition. This type of gun is strictly regulated by the federal government.

The science of cartridge discharge through an examination of the launch, flight path, behavior, and projectile effects of a bullet and its casing.

This term refers to the long tube-shaped part of a firearm. It provides an exit path with direction and velocity for a discharging bullet.

As the name suggests, there is no bullet in a blank. Instead, the round is loaded with black powder so the gun will still fire. Blanks are often used on film and TV sets, to start a race, and for military training.

This is a type of action that fires one round at a time. After the bullet is fired, the empty shell is unloaded by the user manually pulling back on the bolt before loading another round into the chamber.

Derived from the process used to make a barrel, this term refers to the interior of the gun barrel. A special drill is used to carve a hole inside a solid bar stock to make the bore. It can also be used to describe some sizes of shotgun shells.

This is the portion of a gun’s barrel behind the bore. Depending on the model, a gun’s breech may contain the chamber or just the back of the barrel.

Often used for hunting large animals, this is ammunition for shotguns that have medium or large pellets that burst when fired. Buckshot pellets are around .24” in diameter, creating a bigger impact on the target. For hunters, that means a buckshot has the intensity to kill the animal quickly.

This is the metal projectile portion of a cartridge or round that is propelled through a gun’s barrel to hit a target. A bullet is generally cylindrical in shape with one rounded end.

This is the container portion of a cartridge or round. It holds the gunpowder, projectile, and a primer in the casing unit. For rifles and handguns, casings are usually metal. Plastic casings or “shells” are made for shotguns.

The caliber of a gun refers to the diameter of the inside of the gun’s barrel, also known as the bore. The caliber determines the ammunition size that the gun can fire. It is measured in fractions of an inch (.45 caliber) or in millimeters (9 mm).

This refers to the portion of the barrel where the cartridge is seated before firing the gun. Rifles and pistols both have single chambers within the barrel. Revolvers have multiple chambers.

This is when the diameter at the end of a shotgun barrel is reduced to alter the spread of a shot as it leaves the gun.

Often confused with a magazine, a clip holds cartridges or rounds together and is used to either reload magazines (stripper clip) or is inserted into the firearm directly (en-bloc clip).

The act of manually drawing back the hammer of a gun against its spring. This action arms the hammer to release when the trigger is pulled. Some firearms with internal hammers are cocked automatically when the shooter pulls the trigger.

Found only in revolvers, this is the portion of the gun containing multiple chambers. The cylinder rotates so each cartridge aligns with the barrel before firing.

A shotgun with two barrels rather than just one. The barrels can either be side by side (SxS) or one over the other (O/U). The barrels are most commonly the same sized bore.

This semi-automatic pistol magazine holds cartridges in two vertical lines, side by side, with a tapered top, so only one cartridge is fed into the chamber at a time.

Two shots fired rapidly back to back in succession. Typically, the shooter doesn’t aim at another target between shots.

A round of ammunition that is completely inert and has no explosive charge, unlike a blank. Dummy rounds are most often used for training exercises.

A gun’s mechanism that releases or “kicks” the spent case from the chamber.

A gun’s mechanism that pulls cases from the chamber after the ammunition has been fired.

According to the federal government definition, a firearm is a rifle, shotgun, or handgun that uses gunpowder as a propellant. The act of combustion must be present for the device to be considered a firearm.

The firing pin is directly behind a chambered cartridge of a hammer-fired gun. When the hammer strikes the firing pin, it impacts the cartridge’s primer cap to discharge the weapon.

This attachment lessens the flash of light as a round exits a gun’s barrel by allowing hot air and gas to escape. It attaches directly to the end of a firearm’s barrel.

A layer of buildup that accumulates in a gun’s bore as a result of the firing process. Mostly made of carbon, lead, copper, and wax, it can interfere with a gun’s accuracy if not cleaned out regularly.

Similar to calibers of handguns and rifles, this term is used to reference the bore size of a shotgun.

This is a series of popular semi-automatic, short recoil-operated pistols designed and produced by the Austrian company, Glock Ges.m.b.H. Although this term is sometimes incorrectly used as slang for any handgun, it should only be used when referring to the Austrian branded pistols.

This term is used as a unit of measurement that defines the weight of a bullet or the amount of powder in a single cartridge. One pound is equal to 7,000 grains.

The grip of a gun refers to the handle of a handgun or side panels of the gun’s handle.

Also referred to as “black powder,” this is the component of ammunition that is used as a propellant in firearms.

A reference to a trigger that can be pulled with very little pressure from the shooter and requires steady hands.

This is the part of the firearm that releases from its spring when the trigger is pulled. It impacts the firing pin to discharge the weapon.

This refers to the distance measured from the portion of the chamber that stops a cartridge’s forward motion to the face of the bolt.

In order to increase expansion upon penetration of a target, a hollow point bullet has a concave nose. It generally does more internal damage to a target.

Constructed primarily of metal, this refers to a non-optical sight.

This term is often used to describe the recoil created when a firearm is discharged. The kick is the backward momentum felt by the shooter.

With this firearm action, the shooter uses a manually cycled lever to extract a spent casing and load a fresh cartridge into the chamber. In other words, it is not a semi-automatic action.

Another term for an automatic firearm, machine guns will fire multiple cartridges with just a single pull of the trigger.

This is the unit that contains the cartridges before they are fed into the chamber of the gun. The term “clip” is sometimes incorrectly used interchangeably with this term. However, they are not the same. Generally, a clip feeds the magazine, which then feeds the gun.

A term used to describe a cartridge with a higher-velocity load or a heavier projectile when compared to the standard cartridge.

This describes the times when the primer in a cartridge fails to ignite and a bullet does not fire.

This is the term for the end of a gun’s barrel. The muzzle is where the projectile exits the firearm.

The portion of the cartridge casing that grips the bullet.

Also referred to as a “handgun,” pistols are smaller firearms designed so a shooter can fire it using one hand, although many shooters will use two hands. These guns are portable and easily concealed.

An attached handle found on rifles or shotguns just behind the trigger that resembles that of a pistol.

When a gun is fired directly at a target from an extremely close range.

Also referred to as a gun’s “kick,” this is the backward momentum or force exerted by a gun as it fires.

This is a general term used for a pistol or handgun that has a multi-chambered cylinder that rotates to align a cartridge with the gun’s barrel before firing.

Fired from the shoulder, rifles have a long barrel when compared to a handgun. It is most often used for shooting that requires more precision.

The spiral pattern of grooves found in a rifle’s barrel or bore, which creates a spin on the projectile. This helps stabilize the bullet and improve accuracy.

The term used for a single cartridge or one unit of ammunition.

A firearm mechanism designed to prevent a gun from being fired by restricting the gun’s trigger. With modern firearms, a gun’s safety should always be engaged until a shooter is ready to fire the weapon.

A tube attached to the top of a firearm that magnifies the target so a shooter can fire accurately from a distance.

This is a slang term for leftover round casings. However, it is also used to reference shotgun ammunition.

A type of long firearm that fires small groups of pellets or large slugs housed in a shell rather than a single bullet.

A common name for a suppressor, this mechanism is attached to a gun’s barrel to significantly reduce the sound a gun makes when fired.

When used in reference to firearms, this describes the arc of the bullet as it exits a gun’s muzzle to impact the target.

This is the actual release device of a firearm that initiates the firing sequence of a gun. Most commonly, a gun’s trigger is a small, curved lever that is pulled backward with the shooter’s pointer finger.

If you’d like to know more about firearms or work with an experienced instructor who can help you learn the basics of shooting, The Range 702 offers in-depth classes and firearms training right in the heart of Las Vegas. Contact our team for more information or to register for one of our courses.