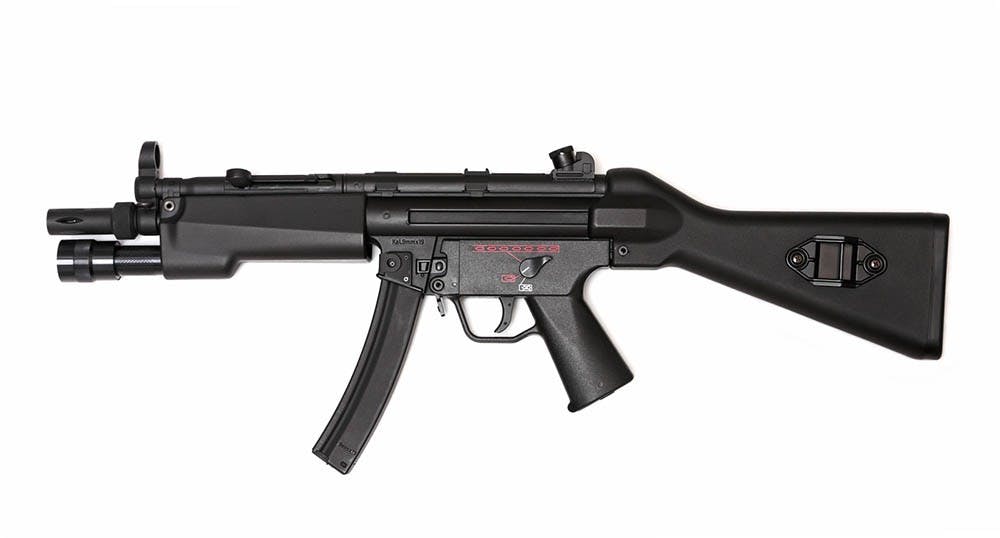 The German “Maschinenpistole 5,” or MP5 as it is commonly called, is an iconic weapon that has seen use on virtually all continents over the past fifty years.

If you’re a fan of cop movies, action flicks, or you’ve seen real action as a member of an armed forces unit, odds are that the profile of the Heckler and Koch MP5 is as familiar as it is iconic. The MP5 is a machine pistol, meaning that it generally fires a handgun round, is lightweight, handheld, and offers the capacity for shooting either in semi-automatic or fully-automatic mode.

The MP5 is, by definition, an absolute blast to shoot. Let’s take a look at the basic history, specification, and uses of this venerable firearm.

HISTORY OF THE MP5

Heckler & Koch, known by most shooters as H&K, originally created a wildly popular rifle known as the G3. The success of the G3 encouraged H&K to create a line of small arms weapons, the fourth wave of which contained the compact firearm known as the HK54. This gun then morphed into the MP5 during the mid-1960s and became an iconic weapon and a recognizable sub-machine gun as a result of its popularity with SWAT teams, federal police forces, and even the secret service. The MP5 was adopted by several nations and is currently manufactured under license in Greece, Mexico, Iran, Pakistan, Saudi Arabia, Sudan, Turkey, and the UK.

The MP5 is not designed as a long-range weapon, nor has it ever had aspirations to be a sharpshooter’s gun or choice. Instead, the MP5 was designed to deliver a high rate of fire on targets that range from 5-25 yards away.

Knowing this, H&K aligned the sights to register dead-on hits at 25 yards using standard NATO-approved, 124-grain 9mm rounds. The rear sight is an adjustable peep aperture, while the front is a ghost-ring post sight that aligns with the rear for quick target acquisition.

With a polymer trigger module and hammer firing mechanism interface with a three-position fire control selector, shooters can select either safe, single fire, or continuous fire. One of the most visible design elements of the MP5 is the thin, curved magazine protruding from the bottom of the receiver. Users generally have the choice between 15 or 30-round magazines with the 30-round units being the most popular.

Loading the rifle is as simple as inserting a loaded magazine and then manipulating the charging handle located on the top of the weapon. Hollywood loves showing its bad guys slapping home the cocking handle in dramatic fashion, but less sinister shooters can simply rotate the charging handle to load a round into the chamber.

If you are looking for an interesting submachine gun to shoot that is as historic as it is purposeful, look no further than the H&K MP5.