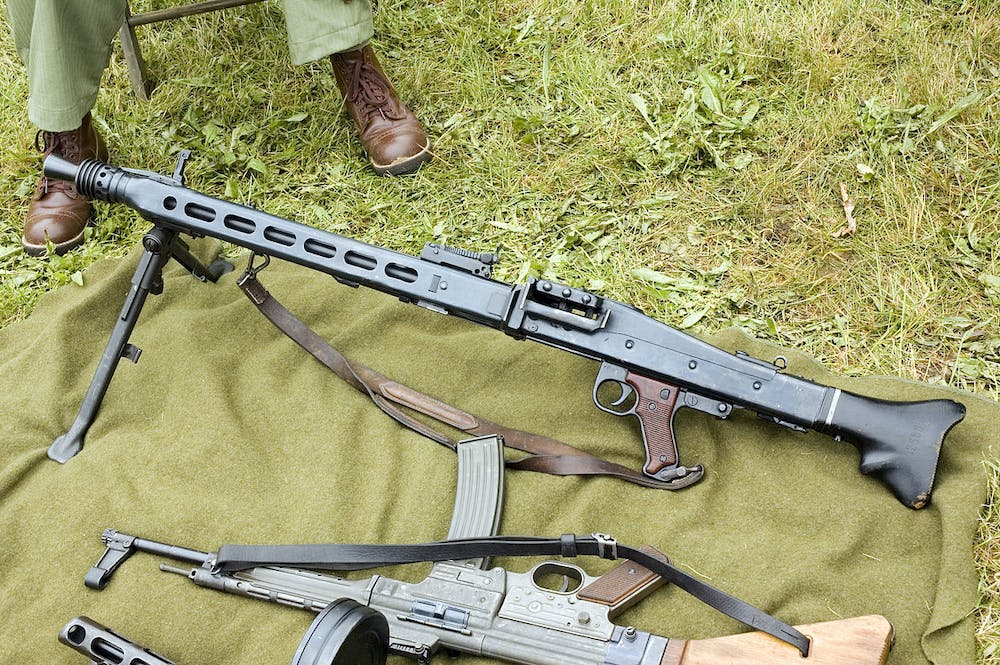 Prior to the introduction of the Maschinengewehr 42, or MG42 for short, the German military deployed the MG34. The MG34 was an intricate and lightweight machine gun that could be easily carried by one soldier in the field of battle. However, the nuanced design and feathery weight of the MG34 began to present problems when it came to battlefield durability. Hence, the German war machine began to work on a more durable replacement for the popular MG34. The MG42 was the answer, and it provided several distinct advantages over its predecessor.

First, the MG34 took approximately 150 man-hours to build, while the MG42 dropped that requirement down to just 75 hours. This tremendous achievement alone would have been enough to push the ‘42’ to the front of the line. But, several functional upgrades were employed that further differentiated the MG42 from other contemporary machine guns in use during WWII.
The rate of fire was boosted from 900 rounds per minute in the MG34 to 1200-1500 rounds per minute, depending on which specific bolt was used. This gave the weapon a dominant stance on the battlefield. The Allied forces were commonly using either the American Browning M2 machine gun or the British Vickers at the time, which each only fired around 450-600 rounds per minute. The increased cadence of fire inherent to the MG42 led to its nickname as “Hitler’s Buzzsaw.” It was a truly ferocious weapon of war.

DURABILITY THANKS TO STAMPED STEEL

Other notable improvements over the MG34 included the extensive use of stamped steel parts instead of forged steel components. This created a lightweight but durable gun that could be assembled by less-skilled workers in half the time.

Stamped steel is also more forgiving on the battlefield, as evidenced by the impressive durability of the legendary AK-47 itself, built mainly of stamped steel parts. The MG42 could also stay in the heat of battle more easily since a lone soldier could change its barrel in less than 10 seconds – with most soldiers choosing to do so every 250 rounds or so. Teams of three machine gunners would take up positions against Allied advancements, with two gunners covering the third machine gun during reloads or barrel changes. 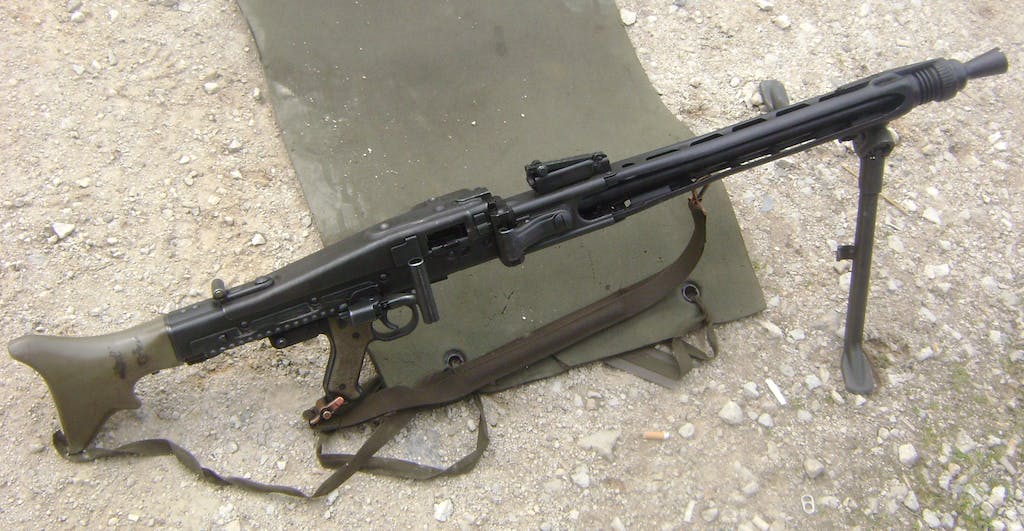 Firing the MG42 is an experience that only really comes to life when the trigger is pulled. There is a sensation of dominant power and finely tuned machinery that comes to mind when unleashing a drum or belt of the MG42’s standard round. The powerful 7.92x57mm cartridge and the maximum firing range of nearly three miles demonstrates the weapon’s devastating nature. While most were used to provide suppressive fire at ranges of just 100-500 yards, German soldiers were known to affix telescopic sights to their MG42s to rain long range destruction on their opponents.

More than 420,000 MG42s were produced from 1942-1945, and many are still in use today within army units of Asian, European, and African nations. If you’ve never fired a machine gun before, there are several that you absolutely must add to your list. Work your way through the list and immerse yourself in what it might have felt to unleash the power of hundreds of rounds per minute in the heat of battle.

The MG42, “Hitler’s Buzzsaw,” was a weapon that was feared by the Allies and caused much devastation in the European Theater. With its impressive firepower, you definitely have to see the MG42 in action up close! Head over to The Range and try this firearm for yourself!