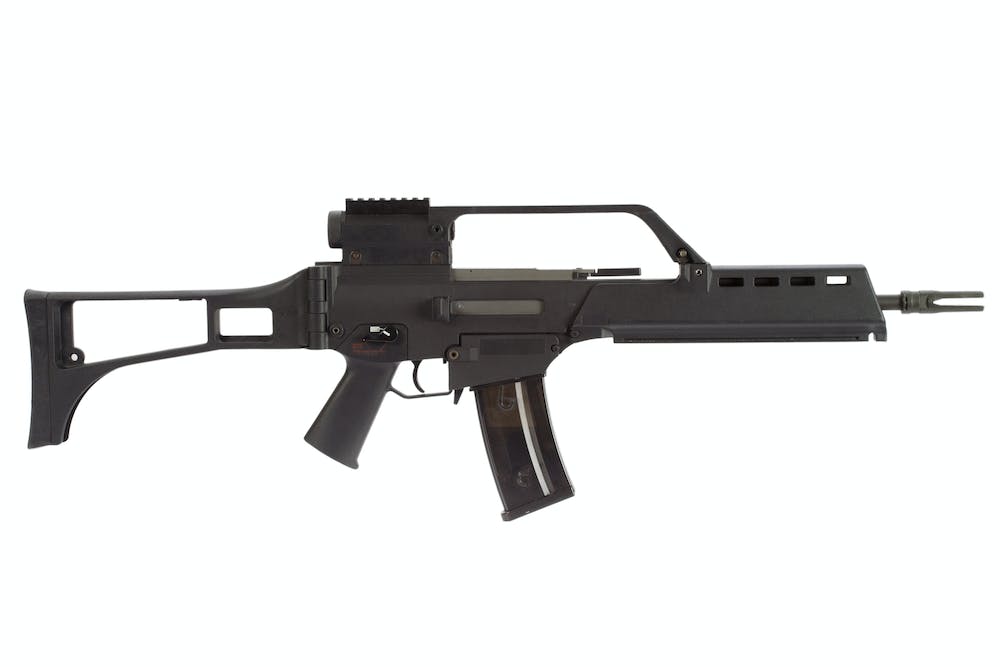 Heckler and Koch, commonly referred to as H&K among shooting enthusiasts, has a legacy of creating firearms that are exceptional. In fact, they have been adopted by armies from around the world as standard issue troop weapons. The H&K G3 was created in the late 1950s and still serves admirably today. But some three decades after the original G3 battle rifle was released, H&K knew that they had to upgrade their incredibly popular weapon. Hence, the G36 was born.

The G36 is a compact assault rifle that is chambered in the venerable 5.56mm NATO round. This common military cartridge was chosen for its availability, reliability in the field, lightweight performance, and ease of use. The same round is used in US M4 carbines to great effect. In 1996, the first production model G36 was ushered through the assembly line and quickly took residence as the service rifle of choice for the German army.

In the late 1990s, the Spanish army adopted the assault rifle for its own troops, and that started a chain reaction of countries who wanted the rifle for their own armed forces. Now, more than 40 nations use the G36 as a primary battle weapon. Nations like France, Brazil, Australia, Egypt, Indonesia, Hong Kong, and others appreciate the lightweight performance of the G36 from H&K.

The G36 is a contemporary selective-fire assault rifle, meaning it can fire in either semi-automatic (one shot for each pull of the trigger) or fully-automatic modes (rounds are fired continuously until the shooter releases the trigger). A fire and safety selector lever sits on the side of each rifle in an ambidextrous design. Most G36s come with a 30-round magazine that is clear to allow for easy management of remaining rounds, while some G36s are equipped with 100-round Beta C-Mags capable of supporting serious downrange firepower

A multi-functional stock adds to the convenience and portability factor, as it can fold to the side to dramatically shorten the overall length of the rifle. Unlike the G3, the G36 is crafted almost entirely of composite materials, with metal only being used in critical areas. Durability is incredible, and the lightweight composites allow for superior strength without excessive weight. The original G3 weighed between 9.04 and 12.2 lbs., while the G36 weighs in at just 6.2 to 8.4 lbs. This makes a big difference to the soldier in the field.

A host of sights, apertures, and scopes are mountable to the G36 to further customize the weapon for specialized use, and several variants of the G36 are available today – most of them applicable to military use. While there are some sporting (non-military) versions of the G36, namely the SL8 and R8 models, they differ greatly from the basic design of the G36 and are not considered a substitute for the original model.

If you’d like to experience the exhilaration of firing one of the most iconic battle weapons of the past several decades, visit Range 702 in Las Vegas. We have G36s, SAWs, MP5s, and other battle-tested, fully-automatic weapons to try out –  just minutes from the Las Vegas Strip.

Save the planet, or maybe just Las Vegas, from an alien invasion. 👽

Terminate the targets with our Judgment Day Shooting Experience at The Range 702.