Go to Table of Contents

What is considered to be a firearm? The official firearm definition, according to the U.S. Bureau of Alcohol, Tobacco, Firearms and Explosives (ATF), is any weapon (including a starter gun) which will or is designed to, or may readily be converted to, expel a projectile by the action of an explosive.

Alternatively, is a shotgun a firearm? Unlike a BB gun, which uses compressed air to fire pellets, a shotgun fires a bullet with explosive action when the trigger is pulled. This fits the ATF definition of a firearm. The parts of a gun that make it a “gun” are the components that allow the explosive reaction to occur and propel the bullet out of the barrel.

A gun uses the force produced by an explosive propellant to project a bullet at a high velocity. When a gun’s trigger is pulled, the hammer strikes a small charge at the end of the shell, also known as the ammunition. As a result, this charge ignites the gunpowder packed behind the bullet.

The burning gunpowder produces gas that expands very rapidly, creating extremely high pressures. These high-pressure gases then exert forces on the back of the bullet and on the gun. Because of the way a gun is designed, the only way for the gas to escape is to push the bullet through the end of the barrel. This is how a bullet is fired from a gun.

How do automatic guns work?

An automatic firearm, such as a universal machine gun, differs from a semi-automatic firearm because the gun will continue to fire rounds as long as the trigger is being pulled and there are rounds in the chamber or magazine. They are strictly regulated in the United States due to lethality, so it’s very difficult (and expensive) to purchase one on the open market.

What type of metal are guns made of?

The earliest guns were made of bronze and brass in the early 13th Century. By the late 15th Century, they were being composed of wrought iron or a steel and iron combination. Today, several alloys are used to make guns, including a mix of manganese, chrome, carbon, nickel, vanadium, aluminum, and other synthetic fibers to make the firearms you see today.

The bronze Heilongjiang hand cannon is believed to be the oldest firearm in the world. Heilongjiang province, China, c. 1288 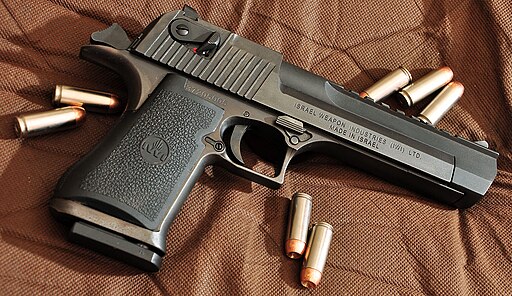 Parts of a Gun and Their Functions

Here are the main parts of a gun and what they do: 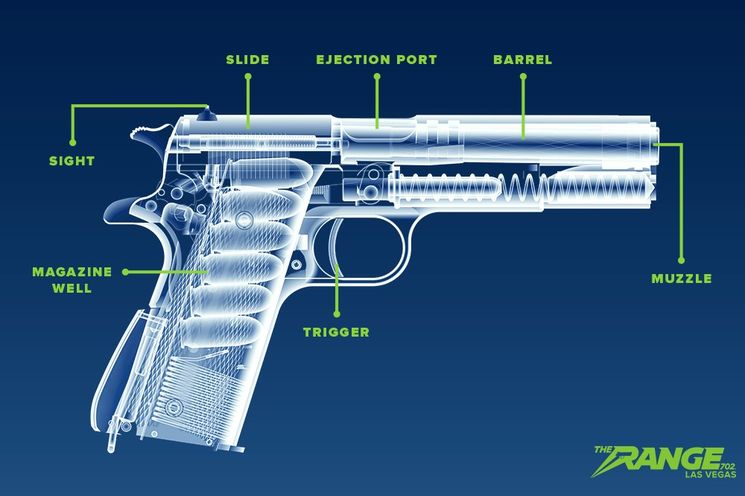 To learn more about internal parts of a handgun, parts of a gun magazine, other gun-related verbiage, and definitions, please refer to our comprehensive glossary of firearm terms.

Differences Between Firearms and Handguns

To put it simply, all handguns are firearms, but not all firearms are handguns.

By definition, a firearm can be any number of gun types that use an explosive action to fire a bullet. With that said, the term “firearm” can refer to handguns, rifles, shotguns, machine guns, and other types of guns and weapons. There are manual firearms and automatic firearms. There is a wide variety of classification of firearms that we’ll explore a little more in the next section.

Go to Table of Contents

If you are new to shooting guns, Chapter 1 of the Ultimate Shooting Range Guide gives a breakdown of the parts of a typical handgun, and a brief history of guns. Some topics you will learn:

There are a lot of types of guns on the market, and you can shoot a selection of them at The Range 702 in Las Vegas. Chapter 2 of the Ultimate Shooting Range Guide is a breakdown the most popular types of guns:

The essential part of your shooting range experience is learning gun safety rules. If you’re not yet familiar with these rules your range safety officer or instructor will go over these in-depth. Chapter 3 covers everything for a safe and exciting experience, including:

In Chapter 4 we cover the various types of gear and equipment you might see and bring to a indoor shooting range. Some of the items covered include:

Chapter 5 of the Ultimate Shooting Range Guide covers the benefits of shooting at an outdoor range plus how to build your own outdoor range. Topics covered include:

Many shooters prefer to shoot at an indoor gun range because they are protected from the elements and it’s great for target practice. In Chapter 6, you will learn:

Chapter 7 of the Ultimate Shooting Range Guide covers the all the need-to-know for getting your concealed carry permit (CCW), including what to bring, and great firearms to consider purchasing for concealed carry.