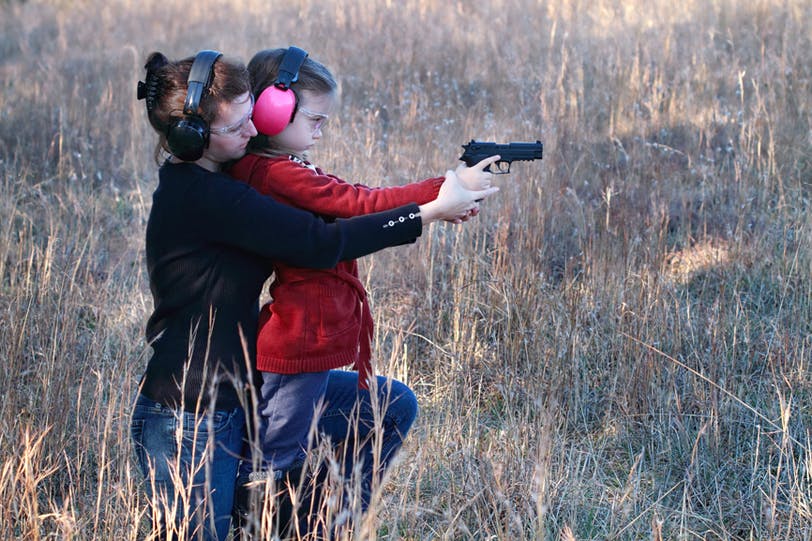 A common question that is heard within the shooting sports community is “at what age did you start shooting?”

Many shooters remember getting their first .22 rifle long before they remember their first bike. Some shooters were introduced to the joys of shooting as a practical measure during a childhood on the farm or in a rural area. While others were lucky enough to have a family member who was an outdoors-man or shooter and took pleasure in introducing young people to responsible and safe shooting. Regardless of the age of the child, it is imperative that adult shooters seek ways to usher in the next generation of shooters in a safe and fun way.

Don’t go near the gun, don’t try to interact in any way with it, and don’t bring more friends over to look at it.

A gun that is not touched is pretty unlikely to shoot anyone, so hammer home the message that touching a gun that is found is absolutely out of the question. Kids are naturally inquisitive, so this is something that will have to be repeated over and over again.

A youngster should understand that while they may understand that leaving a found gun alone is the right choice, other kids in the area may not have had the same level of guidance. Leaving the area minimizes the chances of injury or death if another child picks up the gun and accidentally fires off a live round.

Kids should, at all times, have a trusted adult figure that they can turn to in the event of an emergency. Often times, this is the parent or legal guardian, but it may be a teacher, neighbor, relative, or law enforcement officer. The important factor is for the child to find a responsible adult quickly to minimize the potential for injury if the gun is mishandled.

The four steps above are the basic safety steps that have been generally adopted by the shooting community when it comes to child safety. All kids mature at a different rate, but it is imperative that adults who own guns store them in a responsible manner. That means locking them up at all times, keeping them unloaded until it is time to shoot, and keeping rounds locked up in a separate container or safe.

• Always keep the gun pointed in a safe direction

• Always keep your finger off the trigger until ready to shoot

• Always keep the gun unloaded until ready to fire

These three steps will help reduce gun-related risks to incredibly low levels, and will reinforce the responsible practices that are the hallmark of today’s safe and courteous shooter.