The 50-caliber rifle uses a massive cartridge, capable of taking out the enemy at great distances. Fired from a bench rest using a standard bipod, this semi-automatic rifle barks back with an authoritative report and a firm but manageable level of recoil.

Don’t miss out on your chance to shoot a 50-caliber rifle at our ultimate Las Vegas shooting range! We will also tell you that you can’t shoot one without knowing full well there is something special in play. The 50 Cal is simply unforgettable. What is it like to shoot the .50? Read on to find out.

What Is a 50 CAL Sniper Rifle?

A 50 CAL sniper rifle1 is a type of rifle that is used for long-range shooting by a sniper. The most popular model is the standard Army-issued weapon, the Barrett M82, which is known as the Barrett M107 in the United States. This sniper rifle is an anti-material, semi-automatic, recoil-operated weapon.

When U.S. troops need to take out an enemy position, they’ll often call up one of their snipers. A sniper may be equipped with a rifle chambered in the common 7.62mm NATO round, the potent .338 Lapua Magnum, or the mother of all sniper rifle rounds – the .50 BMG.

BMG stands for Browning Machine Gun, as this monster of a round sees use in Browning’s deadly machine gun even today. Snipers will tell you, that the .50 Caliber is a beast. There is nothing like it when you need absolute power and pinpoint accuracy in one package. 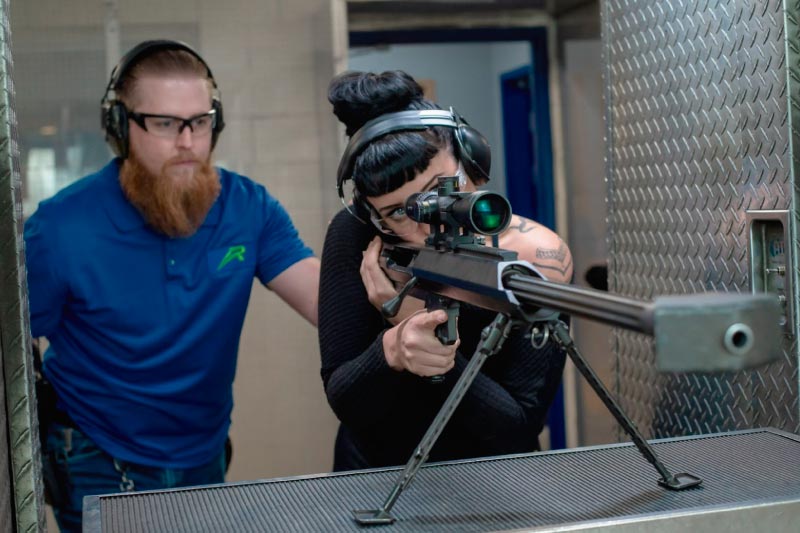 What Is the Effective Range of a 50 Caliber Rifle?

The M107 has one of the longest ranges compared to other sniper rifles. It can hit targets as far out as 2,000 meters, whether rapid-firing the rifle or taking slow, precise shots.

How Much Does a Barrett 50 CAL Weigh?

When the Barrett 50 CAL sniper rifle is fully loaded and is being used with the Picatinny rail, rubber recoil pad, front and rear sights, and rear grips, the weapon weighs 35 pounds. This is why you will often see people using a bipod when firing off rounds of ammo at our Las Vegas shooting range.

The M107 has a maximum range of around 6,800 meters. However, it is the most effective at 2,000 meters when fired by an experienced marksman. Although, most civilians who want to fire one at a shooting range do well with accuracy at ranges up to 1,000 meters.

The cost of ammo for a 50 CAL rifle is around $4 per round. However, when purchased in bulk, in larger quantities of 150 or more rounds, the cost per round can drop below $3 per round. So, when you are thinking of visiting a Vegas Strip shooting range, consider purchasing a larger quantity of rounds for the best prices.

50 caliber refers to the diameter of the ammunition, so a 50 CAL round’s diameter is half an inch. It is essential to remember it refers to the ammo used by a sniper rifle and has nothing to do with the casing used on the ammo. As a result, there are several variations of 50 caliber ammunition.

On the other hand, 50 BMG is one of the variations of 50 CAL ammo used in compatible BMG machine guns and sniper rifles, like the M1072. It is also half an inch in diameter but usually is longer to give it the power it needs to shoot longer distances. 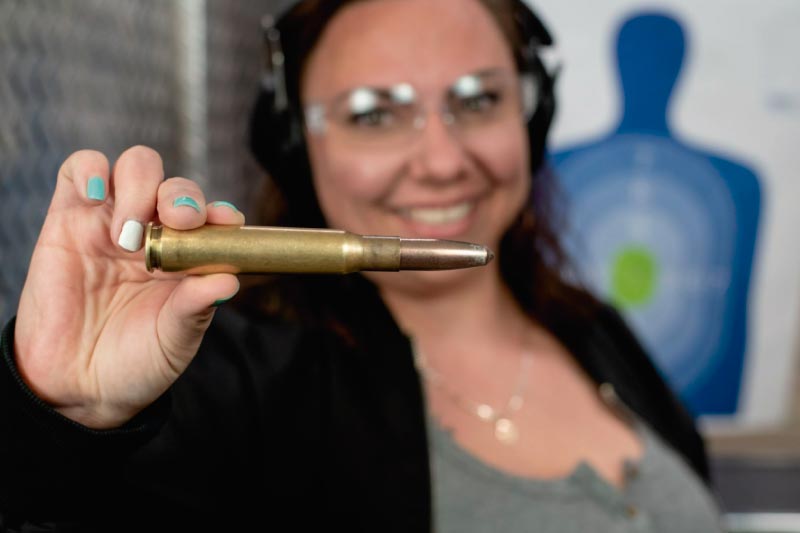 The most common 50 caliber rifle you can shoot today is the Barrett M107. Since this rifle weighs about 30 pounds, so don’t plan on shooting it offhand or in any other way other than from the bench. You’ll want to use the integral bipod on the fore-end to provide stability.

Then, pull the stock in tightly to prevent getting a smack on the shoulder from the sizable recoil delivered by the .50 caliber round. Something important to consider is that the 50 caliber weighs about three times as much as a regular hunting rifle, so even though it is extremely powerful, it doesn’t beat you up quite as much as one might expect.

The concussive blast is what really sets the 50-Cal apart from other lesser guns. You can feel the force of the massive ammo leaving the barrel, forcing a large volume of gasses out of the barrel and out of the two sides of the purpose-built muzzle brake affixed to the end of the barrel.

Bystanders are cautioned not to stand anywhere near the barrel when a shot is being fired. Double hearing protection (in-ear foam protection plus over-the-ear muffs) is also advised.

The 50-Cal will recoil quite a bit, so it is important to pull it in tight to the shoulder – something your instructor will help you with.

Once you’ve felt the kick of a “50,” other guns seem a little less exciting. That said, the weight of the gun helps minimize recoil to about a 12-gauge shotgun level. Don’t worry, if you follow the advice of your range master and exhibit proper form, it’ll be an enjoyable experience.

The 50 CAL sniper rifle, as well as a host of other machine guns, sniper rifles, submachine guns, shotguns, handguns, and more, are available for you to shoot. Register online now or contact us for further details. 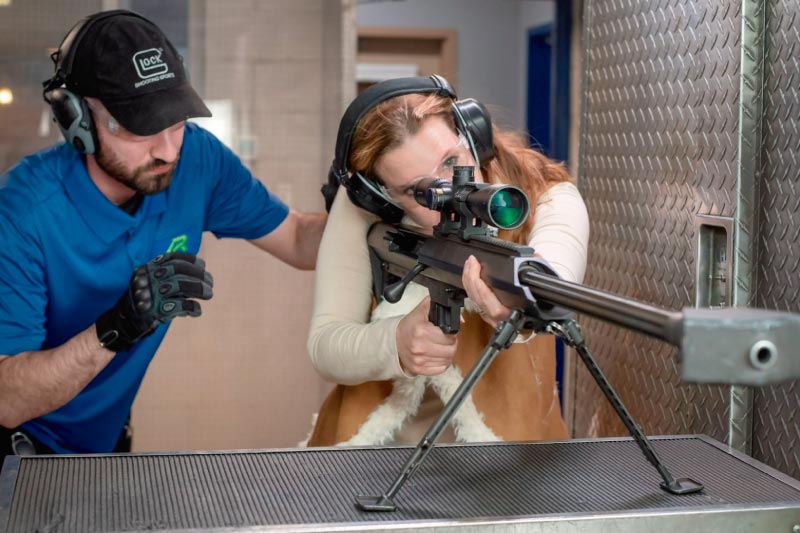